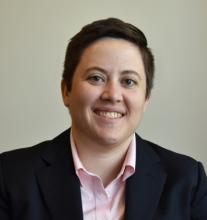 Natalie Shibley is working on a manuscript about race, homosexuality investigations, and notions of disease in the U.S. military from the 1940s to 1990s. Her research has been supported by the William Nelson Cromwell Foundation, the U.S. Army Military History Institute, Cornell University Library, and Penn's Gender, Sexuality, and Women's Studies program, among other sources. Natalie was the 2018 recipient of the DuBois-Wells Graduate Student Paper Prize from the African American Intellectual History Society for her paper, “‘Not fit material for anyone to print’: Race, Respectability, and Military Homosexuality Investigations, 1945-1950.”

As a PRSS Postdoctoral Fellow, Natalie is working with Dorothy Roberts and Eram Alam on an edited volume, Ordering the Human: Global Science and Racial Reason. She is also an affiliated postdoctoral fellow of the Penn Medicine and the Afterlives of Slavery project and co-organized the 2019 "Penn and Slavery" Symposium, which brought together scholars, students, and community members to discuss Penn's relationship to the institution of slavery and its legacies.

This academic year, Natalie is a member of the New-York Historical Society Center for Women's History Early Career Workshop. Shibley was also selected to participate in an NEH Summer Institute, "Digital Methods for Military History."

Natalie earned a PhD from the University of Pennsylvania, where she was the first recipient of a joint doctoral degree in Africana Studies and History. She previously earned an MA from Penn and a BA from Columbia University.

You can watch Natalie discuss some of her recent research at Columbia University's Institute for Research in African American Studies 25th Anniversary Conference here.