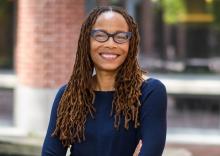 Dorothy Roberts is the fourteenth Penn Integrates Knowledge Professor, George A. Weiss University Professor, and the inaugural Raymond Pace and Sadie Tanner Mossell Alexander Professor of Civil Rights at University of Pennsylvania, where she holds appointments in the Law School and Departments of Africana Studies and Sociology. An internationally recognized scholar, public intellectual, and social justice advocate, she has written and lectured extensively on the interplay of gender, race, and class in legal issues and has been a leader in transforming public thinking and policy on reproductive health, child welfare, and bioethics. Professor Roberts is the author of the award-winning books Killing the Black Body: Race, Reproduction, and the Meaning of Liberty (Random House/Pantheon, 1997) and Shattered Bonds: The Color of Child Welfare (Basic Books/Civitas, 2002), as well as co-editor of six books on constitutional law and gender. She has also published more than eighty articles and essays in books and scholarly journals, including Harvard Law Review, Yale Law Journal, and Stanford Law Review. Her latest book, Fatal Invention: How Science, Politics, and Big Business Re-create Race in the Twenty-First Century, was published by the New Press in July 2011.

Professor Roberts has been a professor at Rutgers and Northwestern University, a visiting professor at Stanford and Fordham, and a fellow at Harvard University's Program in Ethics and the Professions, Stanford’s Center for Comparative Studies in Race and Ethnicity, and the Fulbright Program. She serves as chair of the board of directors of the Black Women’s Health Imperative, on the board of directors of the National Coalition for Child Protection Reform, and on the advisory boards of the Center for Genetics and Society and Family Defense Center. She also serves on a panel of five national experts that is overseeing foster care reform in Washington State and on the Standards Working Group of the California Institute for Regenerative Medicine (stem cell research). She recently received awards from the National Science Foundation, the Robert Wood Johnson Foundation, and the 2010 Dorothy Ann and Clarence L. Ver Steeg Distinguished Research Fellowship.