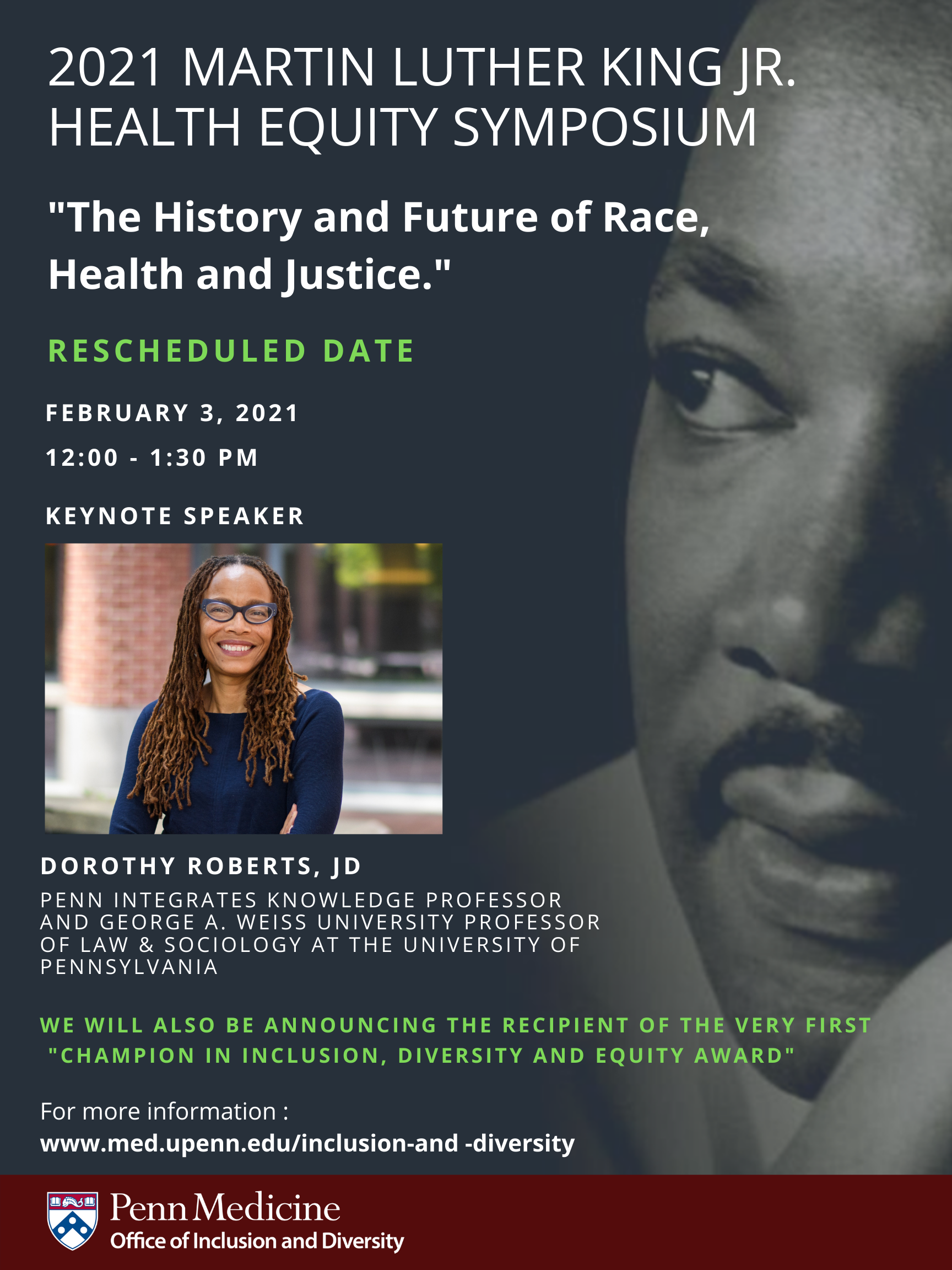 NOTE:  This event has been postponed to February 3rd, 2021
For more information, visit:  https://www.eventbrite.com/e/2021-martin-luther-king-jr-health-equity-sy...
The Penn Medicine Office of Inclusion and Diversity presents its annual symposium involving topics about health equity and disparities.

We are proud to welcome Dorothy Roberts JD, MPH, MA as our 2021 keynote speaker. The title of her talk is "The History and Future of Race, Health, and Justice."

Dorothy Roberts is the 14th Penn Integrates Knowledge Professor and George A. Weiss University Professor of Law & Sociology at the University of Pennsylvania, with joint appointments in the Departments of Africana Studies and Sociology and the Law School, where she is the inaugural Raymond Pace and Sadie Tanner Mossell Alexander Professor of Civil Rights. She is also the founding director of the Penn Program on Race, Science, and Society. An internationally recognized scholar, public intellectual, and social justice advocate, she has written and lectured extensively on race, gender, and class inequities in U.S. institutions and has been a leader in transforming public thinking and policy on reproductive freedom, child welfare, and bioethics. She is the author of Killing the Black Body: Race, Reproduction, and the Meaning of Liberty (Pantheon, 1997/Vintage, 2017), Shattered Bonds: The Color of Child Welfare (Basic Books, 2001), and Fatal Invention: How Science, Politics, and Big Business Re-create Race in the Twenty-First Century (The New Press, 2011), as well as co-editor of six books. She has also published more than 100 articles and essays in books and scholarly journals, including the 2019 Foreword to Harvard Law Review’s Supreme Court issue, “Abolition Constitutionalism.”

Roberts’s research has been supported by fellowships from the American Council of Learned Societies, National Science Foundation, Robert Wood Johnson Foundation, Brocher Foundation, Harvard University Program in Ethics and the Professions, Stanford Center for Comparative Studies in Race and Ethnicity, Northwestern Institute for Policy Research, and the Fulbright Program. She has served on the boards of directors of the American Academy of Political and Social Science, the Black Women’s Health Imperative, and the National Coalition for Child Protection Reform and on the advisory boards of the Center for Genetics and Society, Generations Ahead, and Still She Rises. Recent recognitions of her work include the 2019 election as a College of Physicians of Philadelphia Fellow, the 2017 election to the National Academy of Medicine, the 2016 Society of Family Planning Lifetime Achievement Award, 2015 American Psychiatric Association Solomon Carter Fuller Award, and 2011 election as a Hastings Center Fellow. Her TEDTalk, “The Problem with Race-Based Medicine,” has more than one million views.